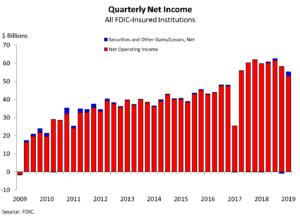 Banks pulled in net income totaling $55.2 billion in fourth quarter 2019, a decline of $4.1 billion (6.9 percent) from a year ago. It’s also down from 3Q 2019’s $57.4 billion. The decline was led by lower net interest income and higher expenses at the country’s 5,177 commercial banks and savings institutions insured by the FDIC.

The banking industry reported full-year 2019 net income of $233.1 billion, down $3.6 billion (1.5 percent) from 2018. The decline in net income was primarily due to slower growth in net interest income and higher loan-loss provisions. Lower noninterest income also contributed to the trend.

The 4,750 institutions the FDIC defines as community banks reported quarterly net income of $6.4 billion, up $270.3 million from a year ago. More than half (53.9 percent) reported net income growth. Net interest income increased by 2.1 percent because of strong annual loan growth (up 5.5 percent).

Average community bank net interest margin fell by 15 basis points to 3.62 percent in the fourth quarter, but still beat the industry-wide average of 3.28 percent (down 20 basis points from 2018). Those numbers were 3.67 percent and 3.36 percent for 2019 as a whole, respectively.

Total loan and lease balances industry-wide increased by $99.5 billion (1 percent) from the previous quarter. Growth among major loan categories was led by consumer loans, which includes credit cards (up $31.3 billion, or 1.8 percent) and residential mortgage loans (up $22 billion, or 1 percent).

Over the past year, total loan and lease balances rose by 4.6 percent, slightly above the 4.5 percent annual growth rate reported last quarter. Commercial and industrial loans registered the largest dollar increase from a year ago (up $131.9 billion, or 6.3 percent).

“While business lending moderated in the fourth quarter amid policy and trade uncertainty, overall bank lending grew by more than $360 billion over the course of 2019, with loans up in nearly every category including business, consumer and real estate,” said James Chessen, economist for the American Bankers Association. “The Federal Reserve’s recent rate cuts have narrowed banks’ net interest margins but have also helped support continued economic growth.”