The first quarterly result of SBI Cards and Payment Services (SBI Cards) after its debut on bourses in March, saw an all-round hit of Covid-19 pandemic.


The company also witnessed Rs 90-crore revenue from late fee reversal during the quarter. Its net profit of the company saw a 66 per cent decline to Rs 84 crore. Had it not been for Covid-19 impact, the company would have reported a sharp 80 per cent year-on-year jump in its pre-tax profit to Rs 692 core.


Although the key numbers such as interest income (up by 42 per cent to Rs 1,348 crore), net interest margin (up by 155 basis points to 16.6 per cent) are strong, some indicators show that a few days of Covid-led disruption in the March quarter had negative implications on the company’s overall business from adding new customers to spending by customers and also repayments. 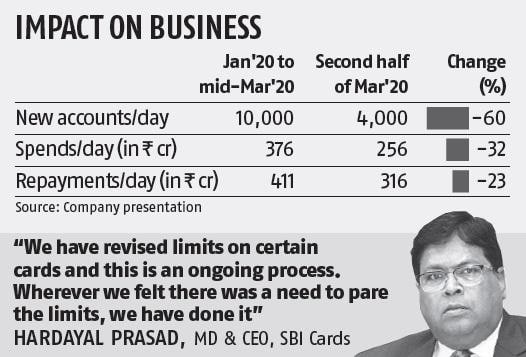 For instance, addition of new accounts fell sharply from 10,000 a day during January to mid-March 2020 to just 4,000 in the later part March. The spends too declined by 32 per cent to Rs 256 crore during the same period. While panic buying by customers in the last 2-3 days of March pushed overall card spending in Q4 by 15.5 per cent year-on-year. The spending got tapered in April and remained volatile, according to the management.


The management of the company said the June quarter will get impacted because they are not able source new cards, and the collections are also down.


What’s more, repayment by customers got impacted due to moratorium and low collection ability due to lockdown. Over 800,000 customers, or 9 per cent, (25 per cent have repaid in April) with outstanding amount of Rs 3,400 crore as of March 2020 have availed moratorium.

This also helped SBI Cards to report lower gross non-performing assets to 2 per cent as of March 2020 from 2.47 per cent December 2019 quarter. As per the management, NPAs would have gone up with ought moratorium.