Credit card spends appear to have recovered in June judging by trends, compared with a 7 per cent month-on-month decline in May because of the second wave of the Covid-19 pandemic.


On a quarterly basis, however, analysts expect credit card spends to be 8 per cent lower in the first quarter of financial year 2021-22 (Q1FY22) than in Q4FY21.

According to a report by ICICI Securities, at the systemic level, the impact of the second wave on credit card and other payments was much lesser than during the first wave, and recovery, too, has been faster. Notwithsta­nding the sequential decline, at Rs 54,700 crore credit card spends in May were still higher than the monthly spends between April and September 2020, indicating that the impact of the second wave was not as severe as in the first wave. In April, credit card spends totalled Rs 59,200 crore, higher than the monthly spends witnessed between April and September of 2020. Analysts expect June to be better than May in terms of credit card spends, given the fact that Unified Payments Interface (UPI) witnessed a 12 per cent month-on-month growth in June, after a slump in May, and average daily PoS/e-co­mmerce spends were 22 per cent higher at Rs 1,600 crore, compared with Rs 1,300 crore in May. “We continue to see sequential growth of 22 per cent in June 2021, based on trends seen in average PoS and e-co­m­merce spends,” said ICICI Securities. 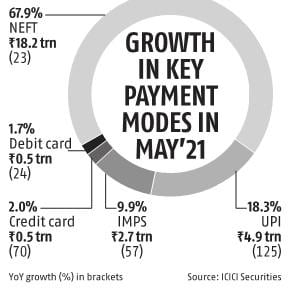 Among players in the credit card segment, HDFC Bank, despite a ban on issuing new credit cards, retained a sizeable, and, perhaps, the lar­gest market share in spends, at 27 per cent in May. SBI Cards has grabbed a market share of 18 per cent. Almost all modes of payments witnessed a drop in May because of the second wa­ve, as induced strict localised lockdowns were imp­osed in almost all parts of the country. But, as the number of infections started declining and the economy started opening up, digital payments also picked up from the slump and posted significant sequential growth.