There’s something cosmically perverse about the fact that a president whose reading habits, by all accounts, are practically nonexistent has inspired a deluge of books about his tenure in the White House.


A number of them are elaborate chronicles of bad behaviour, full of double-dealing and palace intrigue. The sources tend to be current or former White House staffers jostling for position and posterity, strategically leaking to journalists in order to cast themselves as noble custodians and their rivals as craven sycophants. Whatever you might learn from the relentless churn of the news cycle, books like these suggest there’s always more.

Unmaking the Presidency, by Susan Hennessey and Benjamin Wittes, isn’t just another compendium of insider gossip and bumbling treachery. The authors offer something more sobering, more analytical and, at this point, more revealing. This book situates Trump’s tenure in the history of the executive branch, and shows how he is remaking the office itself in his own image.


Ms Hennessey and Mr Wittes, who edit the blog Lawfare, argue that Mr Trump is pursuing a “vision of the presidency” that’s all his own. Not that this “vision” requires much expenditure of effort on the president’s part; Trump, just by being Trump, “elevates the expressive and personal dimensions of the office.” This is the authors’ careful way of saying what they eventually conclude: that Mr Trump wants the executive to look more like an absolutist monarchy, with all of the glory and unfettered power that entails.


The book isn’t the work of bleeding-heart insurgents; the authors are national security pundits, and Ms Wittes is famously a friend and confidant to the former FBI director James Comey. In Unmaking the Presidency, the authors are earnest and methodical — and the case they make is scarier for it. 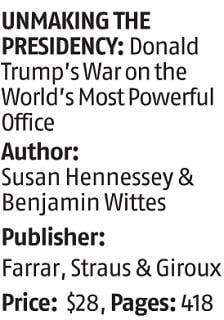 Presidents have always chafed at the limits of the executive, and some, as this book shows, have engaged in power-mongering. Richard Nixon and Watergate may be the most obvious and most flagrant example, but the authors offer more, including George Washington making secret land purchases, Ulysses Grant firing a special prosecutor and John F Kennedy appointing his brother Bobby as attorney general.


For the most part, though, Ms Hennessey and Mr Wittes characterise earlier presidential overreach as “small potatoes” compared to the conflagrations of the last three years. What makes the current presidency truly unprecedented, they say, is how Mr Trump combines a seething vindictiveness with a total lack of interest in governing. “The traditional presidency — indeed, the structure of the Constitution,” the authors observe, “does not account for the president’s caring about something profoundly dumb.”


Mr Trump’s antics are bound to exact a price in terms of his “effectiveness,” the authors write. The president behaves so impulsively, and speaks so outrageously, that some of his advisers have taken to removing papers from his desk so that he won’t be tempted to act on them. The American public and foreign governments have been taught to disregard most of what he says. Instead of a “credibility gap,” the president presides over a credibility void.


But traditional credibility doesn’t matter to him. The authors say that the president is in it for the grand gesture and the cruel optics, like the swift proclamation of his first travel ban, which caused acute suffering but was hacked together so hastily and shoddily that it got tied up in the courts for more than a year. Trump wants to show his supporters, or fans, that he’s acting decisively — if anything, the pushback he gets from establishment institutions only serves to heighten the drama.


Which is why the executive powers Mr Trump brags about the most are those that aren’t subject to legal wrangling or stringent oversight. Among the many phrases he likes to tweet repeatedly, the authors point to one — “absolute right” — as the most telling. “I have the absolute right to PARDON myself,” he tweeted in 2018. Ever since he discovered his pardoning powers, he’s been dangling presidential pardons as incentives, like a lonely birthday boy promising some awesome goody bags.


Unmaking the Presidency was going to press when the Ukraine scandal came to light, prompting Ms Hennessey and Mr Wittes to add a postscript explaining how Trump’s attempt to pressure a foreign government to investigate his political rival is a grubby distillation of everything they write about in their book.


But Mr Trump’s brazenness and his insistent “assertion of prerogative,” the authors write, could teach us something by shining a klieg light on the shadowy corners of executive power. Where other presidents may have worn an uncomfortable mask of hypocrisy, paying “lip service” to lofty ideals of “civic virtue,” the current president doesn’t even pretend to anything so high-minded.


“Whatever Trump is,” they write, “he is not a hypocrite.” Trump’s mask has been off from the beginning. An impeachment acquittal, this book warns, might give Americans a glimpse of what executive power looks like when the gloves come off, too.