How does the rise of Hitler look since the election of Donald Trump? Historians and activists were already busy drawing parallels with fascist demagogues as they watched Marine le Pen gain surprising vote totals in the 2012 race for the French presidency.


Peter Fritzsche’s answer to these questions has been to go back and reassess what we think we know about Hitler’s rise. Gone is the straightforward narrative of the old elites lifting Hitler into power. In Hitler’s First Hundred Days, Fritzsche’s dramatic retelling, even in the final meeting between the key players at 10.45 am on January 30, 1933, nothing was certain. With an anti-Weimar, antidemocratic majority of Communists and Nazis in the Reichstag, no coalition could be assembled to make Parliament work.


There was a time, in the 1970s and 1980s, when the attention of historians was on this level of high politics, seeing Hitler’s rise to power essentially as a result of political machinations and the fundamental opposition of all German elites to democratic government. But since then, historians have moved on to consider other sectors of German society, in part because focusing on elites does not illuminate the character of modern right-wing populism.


But what Fritzsche does with tremendous verve is to turn that question back to 1933: Hitler’s first 101 days marked the key moments, from his appointment as chancellor, which immediately unleashed full-scale political terror against the left, through the March elections to the nationwide boycott of Jewish shops on April 1 and the disbanding of trade unions a month later. By May 1, the basic contours of the Nazi dictatorship may have been still emergent and not entirely secure. But they were unmistakable.


Events that made the Hitler of September 1934 into the prototypical dictator had not all happened yet: Banning other political parties, the execution of Nazi radicals and the death of Hindenburg were still to come before Hitler could merge the offices of president and chancellor, and before all new military recruits swore an oath of personal loyalty to him. But Fritzsche’s 101 days certainly capture the scale of the upheaval and a swiftly coalescing sense of where the new Germany was headed. If this history sounds familiar, that is only because it has been recounted so many times. What makes Fritzsche’s telling so refreshing is that he uses all his skills as a writer and historian to stop us from drifting into that sense of foreknowledge.


After the November 1932 elections, with a significant fall in the Nazi vote, members started to drift away and at Christmas shoppers seemed more interested in the new craze for yo-yos than in political change. On January 1, 1933, the Berlin Tageblatt asked whether its future readers would wonder, “What was his first name again, Adalbert Hitler?” As with Brecht’s Arturo Ui, so for Fritzsche: The rise of Hitler is eminently “resistible.”

Especially thought-provoking are the eyewitnesses in this book, Germans who had nothing to do with the machinations of the elites, who watched events as they unfolded in the street, in their workplaces and apartment blocks, or frequented the great halls where the Nazi mass meetings were held. And this is where populist antipolitics are evoked. As Fritzsche describes a rally where the speaker railed against the Weimar system and its politicians, he translates the audience’s chorus as “Hang them up! Bust their ass!” The pre-echo of “Lock her up!” is audible.


Mostly, though, Fritzsche creates the sense of angry energy through the repetition of one paramount chant that largely distinguishes the Nazis from populists today: “Jews drop dead! Juda verrecke!” This chant reveals a restless, destructive power that permeates the narrative. On day 61 came the nationwide boycott of Jewish shops, which, combined with the purge of Jews from the public service, created a new line of legal and social exclusion. By the end of the first 100 days, civil servants and other professionals were busy proving that they had no Jews in their families.


Violence, spectacle, intimidation, and terror were not just aimed at bludgeoning opponents, silencing critics and empowering activists. They were also aimed at turning economic and political crisis into antipolitics and antipolitics into the basis for a fundamentally different, but still broadly popular, legitimacy. Fritzsche’s lens tilts here from the speaker on the podium to individuals in the crowd, like the young architect Albert Speer, who became a convert after hearing Hitler.


And it is here that the full value of telling his story through eyewitness testimony becomes clear. Fritzsche turns their surprise, ambivalence, enthusiasm or horror into far greater account than most other historians. Even Victor Klemperer, the Jewish-turned-Protestant professor whose diaries have been cited more often than any other in the last 25 years, is held up against the mirror of his own hopes and aspirations.


Klemperer may have been reporting on 14-year-old girls disrupting lessons and intimidating their teachers by singing Nazi songs, but even he was not completely immune to the need to construct a future bridge back to the mainstream of German society. Peter Fritzsche has long sought to understand Germany’s cultural and political transformation from the inside. But it is his capacity for turning the lens back onto the viewer that makes his work so profound and so convincing. 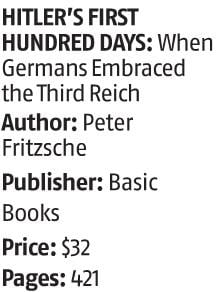