Income bounces back in 3Q as margins drop 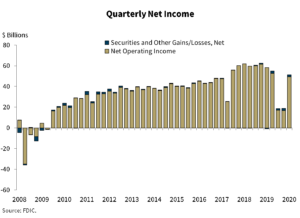 Banks pulled in $51.2 billion in net income during the third quarter, a 10 percent decline from 2019 numbers, but more than double what it was in either of the first two quarters of the year. Average net interest margin, however, fell to historic lows.

Third quarter income at the 5,033 FDIC-insured institutions was down $6.2 billion (10.7 percent) from a year prior. It increased $32.4 billion (173 percent) from the second quarter, partially boosted by a decline in provision expenses of $47.5 billion (76.8 percent).

Just over half of all banks reported improvements in quarterly net income from the second quarter. Unprofitable institutions, however, increased from a year ago to 4.7 percent.

“Modest improvements in the economy and higher consumer spending supported stronger earnings results for the banking industry in the third quarter,” said FDIC Chair Jelena McWilliams. “However, economic uncertainties and pressure on revenue from unprecedented net interest margin compression continued to weigh on the banking industry.”

Average net interest margin fell by 68 basis points from a year ago to 2.68 percent, the lowest level reported in the history of the FDIC’s Quarterly Banking Profile. That number was 2.81 percent in the second quarter. Net interest income declined for a fourth consecutive quarter, falling by $10 billion (7.2 percent) from third quarter 2019 — the largest year-over-year decline on record.

Total loans and leases declined by $84.5 billion (0.8 percent) from the previous quarter, but grew by 4.9 percent compared to a year prior. Community banks, however, reported positive loan growth of 1 percent in that time.