India is becoming a popular destination for foreigners to chase their startup dreams, Technology News, ETtech 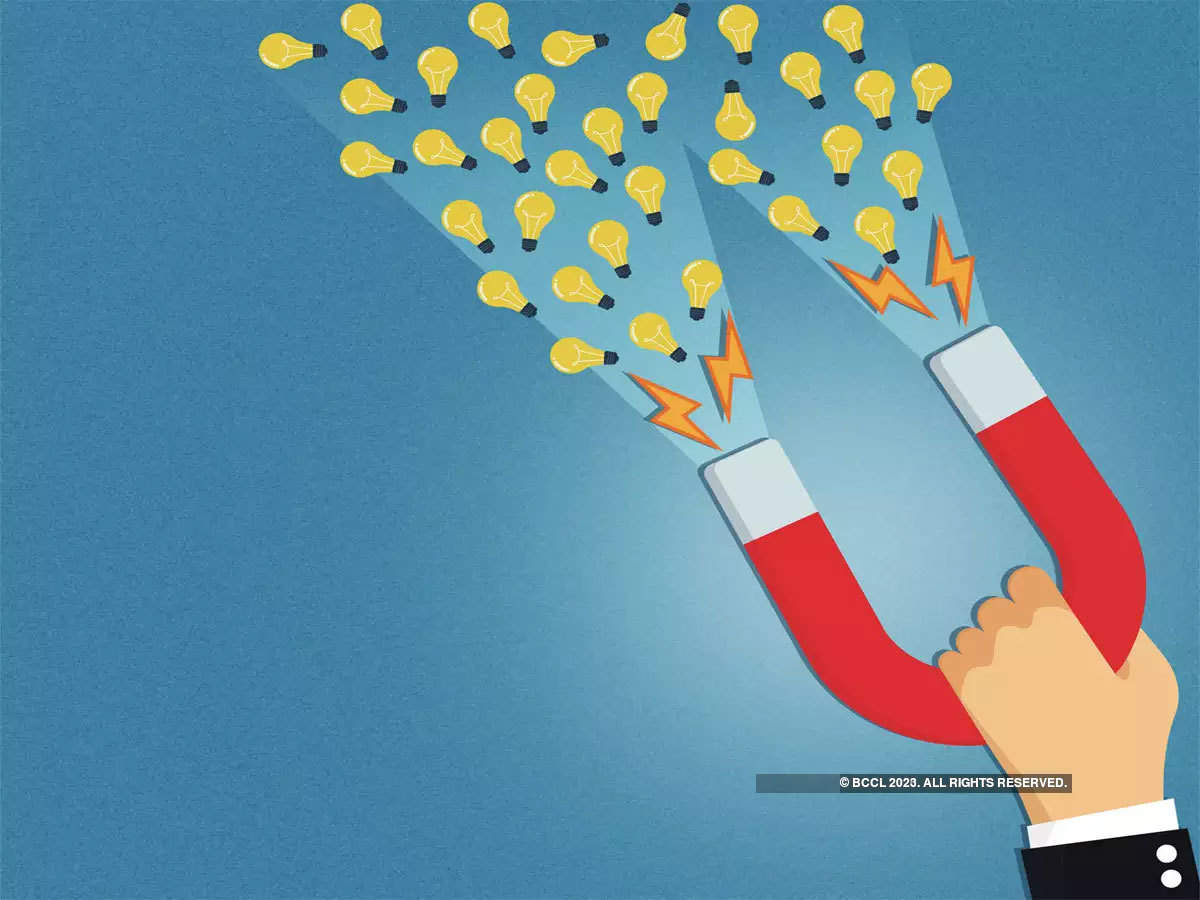 Every morning, Jose Leon, 33, rides his two-wheeler to work in Hyderabad’s Jubilee Hills area, covering a distance of 10 km in under 30 minutes. “While driving in India, I only think of surviving,” he says with a straight face. “But it is not that dangerous once you get a hang of it,” adds the Costa Rican, who moved to India to start a business two years ago.

Leon runs a medical transportation startup called StanPlus, essentially an Uber for ambulances, with his INSEAD batchmate Prabhdeep Singh. Navigating the bylanes of Hyderabad helps him familiarise himself with the new place, makes him feel less like an outsider.

Amid a slew of MNCs that are looking at India, foreigners like Leon are an anomaly. For foreign individuals, “India is still not considered a lucrative destination to set up large-scale businesses,” says chartered accountant Amit Maheshwari, whose firm Ashok Maheshwary & Associates specialises in business advisory for foreign firms and individuals. Bureaucratic delays, frequent regulatory changes in certain sectors and lack of investor trust dampen their spirits. 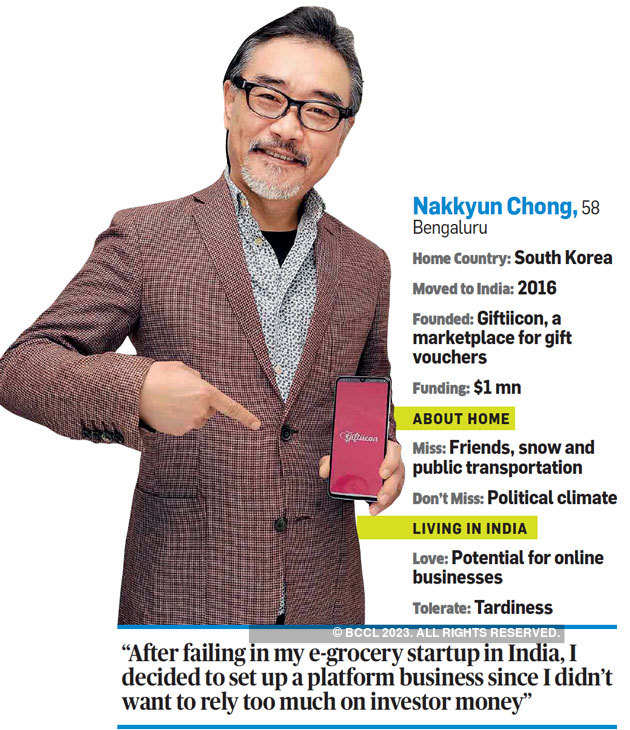 “You see an uptick largely in the food and beverages segment, where foreigners set up restaurants or food supply businesses to cater to their community of expats in India,” he adds.

Despite several stumbling blocks, a host of foreign nationals have relocated to India to fulfil their startup ambitions in the tech sector.

In Bengaluru, Nakkyun Chong, 58, from South Korea has netted $1 million in seed funding to build Giftiicon, a marketplace for gift vouchers. British entrepreneur Lizzie Chapman is running a fintech company called ZestMoney in the same city, while 48-yearold Steve Hardgrave from the US has raised $75 million in funding to grow his edutech startup Varthana that offers services to improve access to private school education in India. In 2016, Washington-born Katie Taylor moved from Massachusetts Institute of Technology in Boston to Pune. The move was triggered by an ongoing project at MIT to build solar-powered irrigation systems to Indian farmers. “We would make assumptions about their requirements while working at MIT. But in our interactions with farmers during our India trips we realised we were getting it all wrong.” Her venture has raised an undisclosed amount of funding from MIT and Tata Trusts in India, among other institutional investors.

In the last two years, Mumbai-based chartered accountant Paras Savla has seen a 60% spike in enquiries from foreigners wanting to set up businesses in India. “Most of them are in the services and tech sectors,” he says.

South Korea’s Chong failed in his first attempt of starting up in India couple of years ago. He delved into the e-grocery space and yielded to the high logistics and maintenance cost of running warehouses. But he saw a second chance in the country’s growing online market to create Giftiicon. The soon-to-be-launched platform — synced with a user’s Facebook and WhatsApp contacts — will allow users to send gift vouchers from various brands to people in their circle. “I decided to set up a platform business since I didn’t want to rely too much on investor money,” he says. 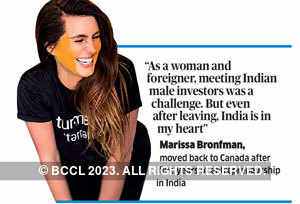 The size of Indian consumer market, tech talent and low labour cost are a huge draw for foreign entrepreneurs. People like Savla and Maheshwari, who specialise in assisting foreign individuals and entities on financial matters, also make it easier for them to set up businesses and register companies.

“Back in the 1990s when I came to India, it took me a year to get my company registered as a foreign national. Now it takes a matter of weeks,” says Mikael Gislen, 57, who moved from Sweden to India in 1994 and runs a company, Gislen Software, in Chennai with an annual revenue of Rs 16 crore.

The two areas where foreign entrepreneurs face the most resistance are in hiring senior talent and in getting investor interest. Leon remembers a hiring story that was a cultural lesson in disguise. He was about to make an offer to someone from Udaipur when the potential hire told him his parents were reluctant. 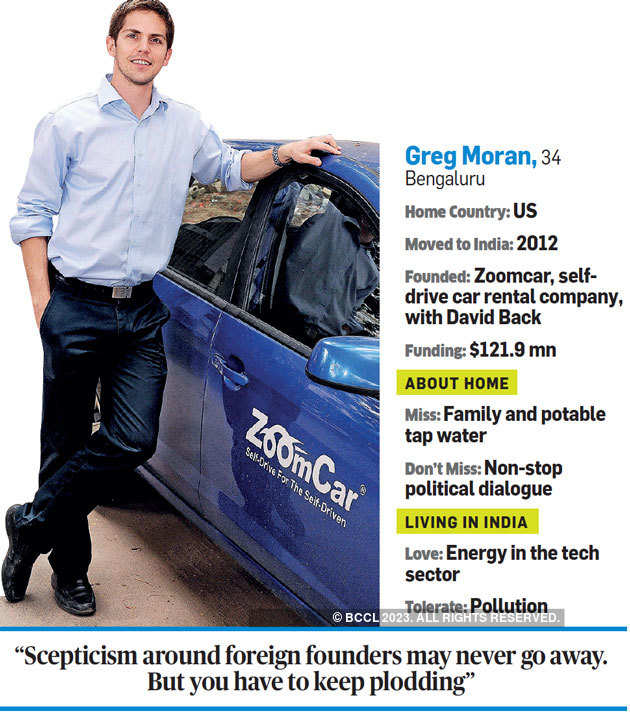 That parents were involved in a professional decision of this nature was a culture shock to Leon. “My cofounder Prabhdeep intervened during the call and asked to speak to his parents. He told them about our educational background and vision for the company. I thought the guy would freak out but it worked in our favour. He joined us two days later.” Since then, Leon asks every potential hire about their family and financial obligations.

A common fear among investors and potential hires is whether the foreign founder will be in India for the long haul, says Greg Moran, cofounder of ZoomCar. Moran, a New Yorker, moved to Bengaluru in 2012 to start the self-drive car rental company.

“There weren’t too many startups then. They weren’t as fashionable to work with as they are today. And people had a lot of questions about the market we were operating in,” he recalls. Moran relied extensively on his referral network to hire talent in the early days. To woo investors, he focused on making the product speak for itself. 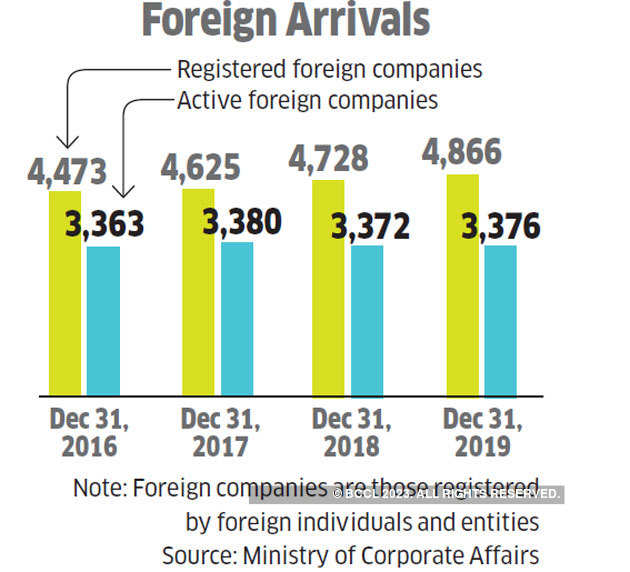 “Scepticism around foreign founders may never go away. But you have to keep plodding,” says Moran, 34. ZoomCar has raised $121.9 million in funding to date. “The company is EBITDA profitable which is big for us,” he adds.

For many foreigners eager to venture into the Indian tech startup ecosystem, ZoomCar is a success story. The problem, says Prabhdeep Singh, is that such stories are very few. To make matters worse, they are often outweighed by stories of foreigners retreating to their home country after a stint in India.

Take, for instance, Canadian entrepreneur Marissa Bronfman. The 33-year-old former journalist came to Indian on a work assignment a decade ago and fell in love with the country. In 2011, she moved to Mumbai and started a digital agency bagging a few luxury clients rather quickly. Soon after, she started a vegan food business.

“But the increasing cost of living in India as a foreigner, what with the taxes, and the lack of institutional support became an issue. As a woman and foreigner, meeting Indian male investors for my food venture was also a challenge,” she says. 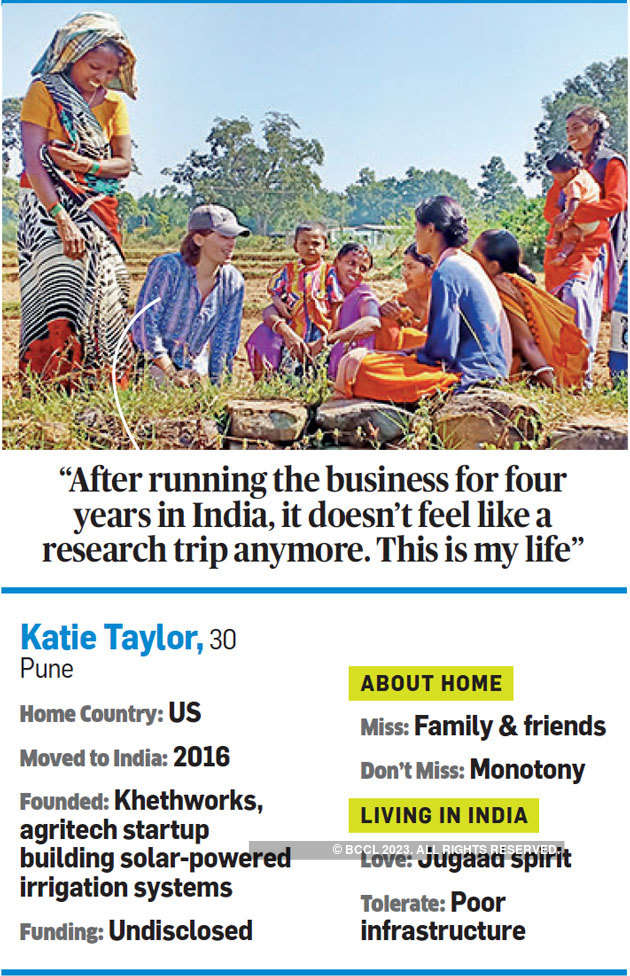 “Scaling a natural food business is far more difficult than scaling a software company or a mobile app. Not only was I a woman raising for something historically and culturally associated with the domestic realm, but my status as a foreigner added an extra layer of perceived risk.”

In 2017, Bronfman moved back to Toronto.

Data from the Ministry of Corporate Affairs points to this churn. While the total number of companies registered by foreign individuals and entities went up from 4,625 to 4,866 between 2017 and 2019, the number of active firms in this category went down a little from 3,380 to 3,376.

Even Zoomcar’s cofounder David Back returned to the US in 2015, after staying in India for about three years. When StanPlus was founded in Hyderabad in 2016, two of its three cofounders were foreigners – Leon and Antoine Poirson from France. But Poirson moved out of India eventually, says Singh, the company’s Indian cofounder. 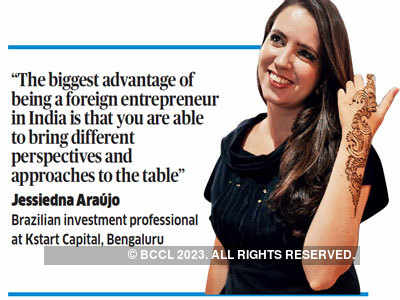 “We need more diversity in the people creating new-age companies in order to bring fresh perspectives and work ethics,” says Singh. During the early days of StanPlus, the cofounders decided against paying bribes to expedite processes.

“I reasoned that this is how things are done in India, but they said that’s not how we would work,” recalls Singh. StanPlus, having raised $1.1 million in funding so far, occupies a 30% market share in Hyderabad at present. It has doubled its capacity over the last six months, with 1,000 owned and affiliated ambulances operating across Bengaluru, Visakhapatnam and Hyderabad. Jessiedna Araujo, an investment professional at Kstart Capital, Bengaluru, agrees with Singh.

“The biggest advantage of being a foreign entrepreneur in India is that you are able to bring different perspectives and approaches to the table,” says the former electrical engineer from Brazil. Araujo moved to India in 2016 and started a food truck business in Bengaluru, which she sold off two years later. She tolerates the city’s traffic and pollution but likes the people and “affordable cost of living”. 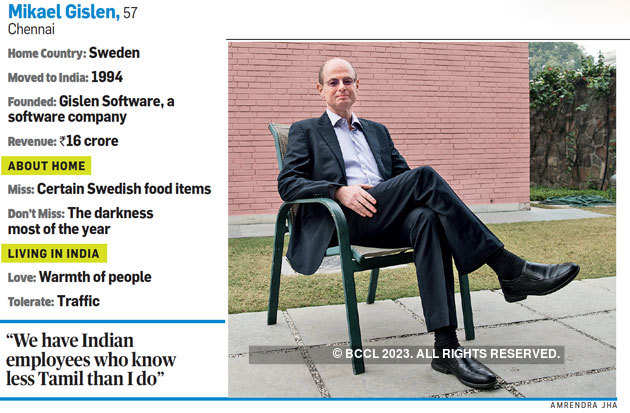 Pollution levels in the city bug the athlete in Moran too.

“I also miss potable tap water,” he says. After spending close to three decades in India, Gislen from Sweden doesn’t feel like an outsider in Chennai anymore. “I understand Tamil better than some of the North Indian employees in my firm,” he says. Leon misses the clear blue skies of Costa Rica. Chong of Giftiicon misses the snow of South Korea and his all-weather friends there.

What some of them are happy to be rid of is the political climate of their home country but almost all are concerned about the current scenario of political and economic instability in India. “It is disturbing to see hate speech and discrimination becoming acceptable and leading to violence in my home country, the US, and here,” says Taylor of Khethworks. India is not an adventurous trip for any of them. They mean business and they want it to work.

“After running a business for four years in India, it doesn’t feel like a research trip anymore. This is my life,” says Taylor. Chong has even roped in his 26-year-old daughter Jihyun, who has studied professional design in the US and the UK, to look at the user interface and user experience of his new startup. “I have put in all my life’s savings into this business. I have to make it successful. Otherwise, I will have to go back to Korea and live in the mountains,” he says, only half-jokingly.