India must have at least six banks in top 100 global list: Economic Survey


Being the fifth largest economy, India should have at least six banks in the top 100 global list, and at least eight would be required for a country having a $5-trillion economy, according to the Economic Survey for 2019-20.


Since public sector banks (PSBs) have 70 per cent share of the market, the efficiency of PSBs has to improve, it said.

“India’s banks are disproportionately small, compared to the size of its economy. In 2019, when Indian economy is the fifth largest in the world, our highest ranked bank—State Bank of India— is a lowly 55th in the world and is the only bank to be ranked in the Global top 100,” the Survey observed. Finland, Denmark, and Austria, which are a fraction of India’s size have a bank each in the list, while neighbouring China has 18 banks in the global 100.


“If Indian banks were proportionately large in relation to the size of the Indian economy, we should have at least six banks in the global top 100,” the Survey said. Similarly, India becoming a $5 trillion economy will require at least eight Indian banks to be large enough to belong in the top 100 globally. Therefore, the state of the banking sector needs “urgent attention”. 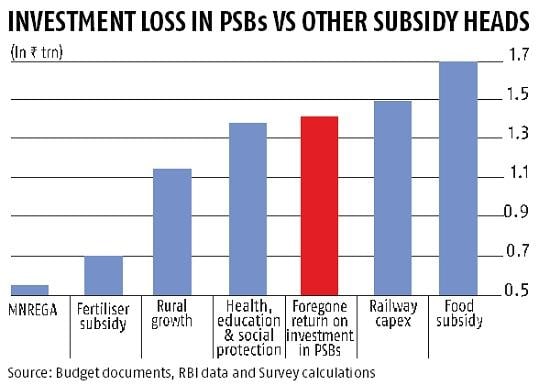 Credit growth of PSBs has been falling since 2013, and anaemic since 2016, while private sector banks grew their credit books in double digits. Low credit penetration has harmed the economic growth and welfare, it said. When it comes to efficiency, PSBs also lag considerably vis-à-vis their private sector peers, the Survey said.


“A large economy needs an efficient banking sector to support its growth. As PSBs account for 70 per cent of the market share in Indian banking, the onus of supporting the Indian economy and fostering its economic development falls on them. Yet, on every performance parameter, PSBs are inefficient compared to their peer groups.”


PSBs account for 80 per cent of non-performing assets, carrying a bad debt book of Rs 7.4 trillion, and PSBs also reported huge losses, when private sector peers reported profits in 2019. Over 90 per cent of bank fraud cases happened with PSBs. “Therefore, the quality of screening and monitoring processes for corporate lending adopted by PSBs needs urgent attention.” Equity markets also discount PSBs. “The median market-to-book ratio of PSBs equals 0.64, which is less than 1/5th the median of 3.33 for the new private banks,” the Survey said. If the market-to-book ratio of each PSB doubled, “which envisages an extremely modest and unambitious increase,” the gain would be Rs 5.2 trillion, about five times the Budgeted estimate for disinvestment for 2019 of Rs 1.05 trillion.


In a more realistic scenario where the market-to-book ratio of each PSB becomes equal to that of the second worst performing private bank, the gain to the government could be as high as Rs 9.1 trillion. However, if the ratio of each public sector bank becomes equivalent to the media of private sector banks, the gain to the government would be an enormous Rs 11.8 trillion. “This scenario analysis clearly suggests that the costs stemming from inefficiency of PSBs are enormous,” the Survey pointed out.