One rupee: The value that foreign brokerages attach to the YES Bank stock

JP Morgan cut its target price for YES Bank on Thursday to Rs 1 per share, taking into account the potential fall in the lender’s net worth due to stressed assets. Macquarie Capital Securities also said if State Bank of India (SBI) decided to buy stake in the bank, they should buy it at Rs 1 per share as the net worth is hugely impaired.


“We believe forced bailout investors will likely want the bank to be acquired at near-zero value to account for risks associated with the stress book and likely loss of deposits. We think the bank will need to be recapitalised at nominal equity value and could test dilution of additional tier 1 (AT1) capital. We remain underweight and cut our target price to Rs 1 as we believe net worth is largely impaired,” JP Morgan said.

Explaining its reasons for the meagre price for YES Bank shares, Macquarie said the bank has a net worth of Rs 25,000 crore. However, its BB and below rated loan portfolio is approximately Rs 30,000 crore and the BBB below book is almost Rs 50,000 crore. “If we assume substantial portion of BB and below is wiped off, and say 10-15 per cent of the BBB book is to be written off, it implies the current net worth of the bank is zero (after factoring in 25 per cent of the tax benefits),” it said. 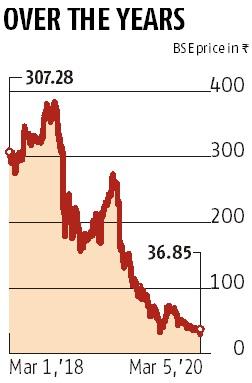 YES Bank’s shares soared 26 per cent to Rs 36.85 on Thursday after reports said that SBI-led consortium would buy a significant stake in the bank. But the share price may not hold at current levels if these brokerages’ projections turn true.


“The quasi-sovereign bailout, we believe, is a bondholder/depositor bailout and not an equity one. Hence, today’s rally in the stock is unjustified. The new capital will likely come in at a steep discount to current share price,” JP Morgan said.


Worse, it would send out wrong signals. Any bail out of a private sector entity by public sector undertakings (PSUs), government, or taxpayers indeed creates a moral hazard. “The fact that the government is considering such a bail out proposal shows the risk inherent in investing in PSU banks/companies who continue to be subjected to the vagaries and compulsions of the government. The bigger casualty is taxpayers as their money is being used to infuse capital in PSU banks time and again. It is the taxpayers who are bailing out YES Bank indirectly,” wrote analysts at Macquarie led by Suresh Ganapathy.


The acquisition of a significant stake in YES Bank may not be good for SBI’s shareholders either, say analysts. “It will be incrementally negative for its valuations, as it sets a precedent for nationalisation of any future private losses. Part of this is already captured in the sharp discount at which the stock trades versus private peers,” JP Morgan said.


There could be other challenges. “One buys a bank for its liabilities franchise and not for its assets. We are unsure of YES Bank’s quality of liabilities franchise, which perhaps could have further got affected due to the current solvency issues. Consolidation would have brought about a lot of integration challenges as well as legal challenges, as we believe SBI Act needs to be amended for SBI to acquire a private sector bank. Even in this case, the deal will require blessings of the regulator as well as the government,” Macquarie said.