The Supreme Court on Tuesday ruled that banks cannot charge interest on interest for accounts that sought moratorium relief during the pandemic period last year and the amount so collected must be refunded in the next instalment of the loan account.


The cut-off for such moratorium, the apex court ruled, would be August 31, 2020, beyond which all loans that had not been repaid as per schedule can be declared as non-performing assets (NPA). Rejecting the pleas to extend the six-month loan moratorium period, the court said a complete waiver of interest during the moratorium cannot be granted either.

Banks can also finally start declaring their bad loans (loans which have not been repaid for 90 days or more), with the court vacating the interim relief granted earlier not to declare the accounts of borrowers as NPA. In September last year, the court had directed that accounts not declared NPAs as of August 31 should not be classified as such until further orders.


The original moratorium came into effect in March 2020, which ran for three months. However, in May, the Reserve Bank of India (RBI) had extended the moratorium for three more months till August 31.


Judges are not financial experts


The three-judge bench refused to pass a judgment on the extension of the moratorium period as it was in the realm of economic policies, which was best left to the policymakers and experts. “The interference of the court is not called for” in such cases, the judgment read.


Whether the central government and the RBI must provide for some further reliefs over and above the relief packages already offered would “have a far-reaching financial implication on the economy of the country,” the judges ruled after being satisfied that “whatever best can be offered has been offered.”


“Therefore, to grant such a relief of total waiver of interest during the moratorium period would have a far-reaching financial implication in the economy of the country as well as the lenders/banks,” the judges said.


However, giving relief to borrowers, the Supreme Court ruled that any amount already charged shall be refunded, credited, or adjusted in the next instalment of the loan.


The government in October 2020 had announced a scheme for a waiver of compound interest during moratorium for small-ticket loans up to Rs 2 crore. This had cost Rs 5,500 crore to the government.


The court observed that there was no rationale in the Centre’s policy to limit the benefit of waiver of interest on interest or compound interest only to certain loan categories.


The banks in the December quarter had enjoyed lower NPA owing to the standstill on classification. However, they did disclose their suspected overall bad debts as ‘proforma’ NPA in their books and provided for the total. As per a CARE Ratings analysis, banks will have to now record at least Rs 1.2 trillion of excess proforma NPA as actual in the December quarter, but these won’t affect the financial much as they are adequately provided for.


Analysts and bankers welcomed the judgment, but some said it should have come a little earlier and not near the end of the financial year so that banks had time to step up their recovery efforts and show healthier numbers in their books.


“In any case, lenders were giving the memorandum NPA figures as well as the NPA, without considering the new cases. So, now, if somebody’s account is classified as NPA, their Cibil score will be impacted,” said Keki Mistry, vice chairman and CEO of Housing Development Finance Corporation (HDFC). 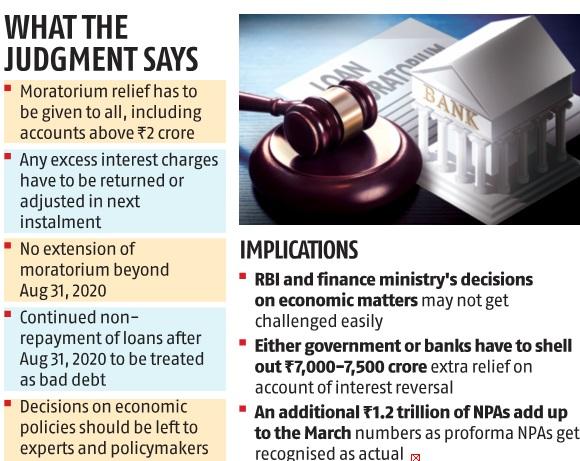 “This improves credit culture in the system and the economy. Hence, there will be more consciousness on the part of the customers to pay their instalments,” Mistry said.


Former State Bank of India (SBI) chairman Rajnish Kumar said the observation in the judgment that financial sector matters are best left to policymakers is very important as in future such issues won’t find ready acceptance in the Supreme Court. “The government and the RBI are capable enough to think about what is to be done best for the financial sector as they have to preserve the financial stability. The judgment is an acknowledgment of that,” Kumar said.


“The judgment ends many uncertainties. The banks can now close their books properly, and step up their recovery process and go about their normal business activities,” Kumar said.


However, petitioners who sought extension of the moratorium said many accounts are still stressed and may end up haunting banks.


“As the SC has rejected any sector-specific relief, in addition to what has been granted by the RBI, 97.5 per cent of borrowers in sectors such as real estate would be impacted resulting in various civil consequences,” said a lawyer representing one of the petitioners.


“This would result in a large number of accounts becoming NPAs because of inadequate relief provided by the RBI,” the lawyer said, requesting anonymity. Considering this, it would be very difficult for the borrowers to mitigate their debt burden, he added.


According to a senior banker, accounts with over Rs 2 crore due should get some reversal of interest in their books as well, but it is not clear yet if the government will bear the cost or banks themselves.


Anil Gupta, vice president-financial sector ratings at ICRA, said the government will have to spend an additional Rs 7,000-7,500 crore to provide compound interest waiver to borrowers with loans above Rs 2 crore. This would be over and above Rs 5,500 crore provided for the interest-on-interest waiver for loans up to Rs 2 crore, he added.


“Charging interest on interest would have eventually diluted the relief granted by the Reserve Bank of India to ailing borrowers and they may perhaps be worse off than pre-COVID stage, ” said Siddharth Srivastava, a partner at Khaitan & Co.