Sony likes a good mess. It wants you to abandon the idea that 5.1-channel surround sound can be delivered without getting tangled in wires (unless you spend a fortune on it).


On the contrary, affordable TVs can be made to sound better with cheap single-unit soundbars. The bargain starts at as low as Rs 1,000. Add some credibility to it and you get the Mi Soundbar 8 for Rs 4,999 (Mi Store), the Samsung HW-N300 for Rs 5,899 (Flipkart) and the JBL Bar 2.0 for Rs 6,999 (Amazon). These time-tested 2.1-channel soundbars can do with the minimum space designated in front of a TV and can light up a small room with loud music and clear vocals. But the output usually maxes out at around 150W and the virtual surround sound is not absolute. The stubborn Japanese techies at Sony are unconvinced.

The next league of soundbars comes with an additional subwoofer. And we must now scramble to find space for a boxy unit that usually weighs above 5 kg. The price-friendly Boat has the Aavante Bar 1500 for Rs 7,499 (Amazon) and JBL has the popular Bar 2.1 for 19,900 (Amazon). Sony does not think an additional subwoofer is one bit an eyesore. Instead, the soundbar it has been pitting in the price range is the HT-RT3 for Rs 17, 740 (Amazon), a 600W set-up that comes with a subwoofer plus two small satellite speakers. So for a surround sound experience, Sony likes to have wires running through the room and says it’s worth the trouble.


To prove a point, the tech giant flew in Hidenori Hino, their head of audio from Tokyo. He met me armed with a detailed survey, a presentation and photos of him mingling with his customers at their homes. He concludes that people prefer to have the boxy subwoofer and the additional speakers for not just a fuller sound but also its aesthetic appeal. As surprising as it may sound, Hino’s got a point. 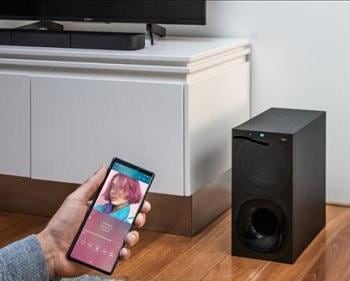 Home theatre systems have traditionally relied on creating a sound ensemble: a centre piece soundbar, an external subwoofer and two additional tallboy speakers or a host of wall-mounted satellite speakers. Rooms were designed to delectably accommodate all of it till powerful and aesthetically pleasing, single-piece soundbars with voice-assistants came along. The Bose Soundbar 700 for Rs 70,000 (Amazon) delivers a spectacular virtual surround sound. And if you climb to the top of the price ladder, Sennheiser has the Dolby Atoms-enabled Ambeo for Rs 1,99,990. A wireless solution may not be possible on a budget, but the technology has helped push the prices down of the traditional set-ups.


Sony’s most competitively priced soundbar yet, the HT-S20R for Rs 14,990 is an ensemble of pieces and wires. It can emulate a home theatre experience on a modest budget — if you manage to find the space and set it up right. Here’s how.


The soundbar is about 30 inches wide, two inches high and is not heavy at 2 kg. It has three front-firing speakers that make your TV louder. The second piece is a hefty, 7 kg subwoofer that is capable of producing rumbling bass with a single160 mm or six-inch driver (the visible round area on the speaker that makes the sound). It’s not a big driver, but the lack of size is compensated by power. Along with the two six-inch high, half kg each rear speakers, the HT-S20R can generate a maximum output of 400W.


All would have been well if the package was not missing an HDMI cable to connect the unit to the TV. Now that’s stingy.


First, pick your favourite listening spot in the room and create the drama around it. The placement of pieces can make all the difference. If your TV is mounted on a wall in the front, the soundbar is best mounted under it. If the TV is on a table, the soundbar placed in front of it will not block the remote control access to the TV. The soundbar connects to the TV with an HDMI ARC, but also optical and analog cables. It connects to the subwoofer via RCA — the famous red-green-white cables — which act as the main power unit.


The subwoofer will need some strategic thinking. Bass is essentially large sound waves that can go from blending in with the music to overpowering it, depending on the quality of the subwoofer and the room acoustics. The unit will create unnerving vibrations if you place it on a glass or metal surface. Find a corner for it on either side of the TV and place it on the floor. This will give the sound more volume.


The two little speakers with wires from the subwoofer must go behind you on both sides. These aren’t standalone units but added to the mix to create a surround sound experience. So you’ll need them at a height roughly above your ears.


Those mumbling actors on TV will be more intelligible if you keep the subwoofer bass low at level 3 or 4. It goes up till 12, and a sleek remote, which need not be pointed at the unit or anywhere really, will help you control it. In John Wick: Chapter 3 — Parabellum, the sound followed the flying bullets and I could actually hear the recoil. The car chases had a nice surround sound feel to it. But frequencies are not very balanced. You’ll sometimes have to crank up the volume and reduce the bass to get the right mix.


The set-up is also Bluetooth-enabled and has USB and AUX inputs, too. In Kanye West, Jay Z and Nicky Minaj’s 2010 single “Monsters”, the bass drum was uplifted but it overpowered the snare. The mids, where the powerful lyrics lie, though, were clean. Foo Fighters’s “The Pretender” was more balanced. At its loudest, it had the neighbours complaining. The Who’s “I Don’t Wanna Get Wise” did not sound great in the bass-heavy set-up.


Sony’s HT-S20R delivers a surround sound, theatre-like experience that is good enough for a large living room and even better for a 14 feet x 16 feet bedroom. It’s a bass-heavy set-up and the subwoofer does most of the heavy lifting with the mids often overpowered. But the distortion at high frequencies is surprisingly kept in check. The maximum output of 400W that the unit generates is much higher than its competitors from Boat, Philips and JBL in the price range.


This is a great value product and a roomful of surround sound that a single soundbar below Rs 50,000 just can’t deliver. To get great sound for Rs 14,999, make your peace with clipping the wires.