The entrepreneur turned a YouTube channel into a lifestyle brand, including a book, restaurants, and TV gigs. Her guiding principle: Treat every step as an education.

This story appears in the
January 2020
issue of
Entrepreneur. Subscribe »

Ayesha Curry just wanted her family and friends to eat healthier. So in 2014, she started sharing her favorite recipes and tips online — but when people outside her inner circle took note, she saw an opportunity to turn a hobby into a career. Over the past six years, Curry has grown her video-blogging habit into a popular YouTube channel with more than half a million subscribers and built an Instagram following that’s nearly seven million strong. She has segued that success into a best-selling cookbook, her own series on Food Network, a barbecue-focused chain of restaurants, a lifestyle website and e-commerce shop, and, with husband (and NBA star) Stephen Curry, launched the Eat. Learn. Play. Foundation in their hometown of Oakland, Calif., to help kids nationwide. To manage this growth, Curry stayed constantly aware of what she did and didn’t know — and what it would take to get to the next step.

How much of a plan did you have when you began all this?

I started with a written blog, and people suggested I make video tutorials. My first one was about making my daughter Riley’s first birthday cake. I put it on Vimeo — I wasn’t even using YouTube yet — and it was god-awful. But for whatever reason, people liked it. So I shifted to YouTube, pretty much posting whatever I wanted to. When I realized this could be a full-fledged business, I had to think about direction.

When did you realize the legitimacy of what you were building?

This sounds silly, but it was when I started receiving gifts in the mail from companies. There’s this business called Freshly Picked Moccasins, and I was obsessed — they sell baby moccasins, and they were pretty expensive at the time. I got a box one day, and it was filled with these little moccasins. My husband has a video of me crying and saying, “I made it! Look at this!” It made me realize that people were taking my opinion and thoughts seriously, and I had to build this the right way.

So how did your strategy shift?

Goal setting became a priority. When I started, I didn’t necessarily have any benchmarks I was working toward. Now I had to come up with a five- and a 10-year plan, and really think about my message, my ethos, and what I wanted to achieve.

And what is that ethos?

It’s to get people back around the family table and in the kitchen, cooking and enjoying a meal together. I started doing research and realized that even having just one family meal together each week can shift a child’s future. Studies show that it can result in kids having better grades in school, improving the likelihood of attending college, lowering obesity risk. So my business became about making the home a little chicer, more accessible, less scary, less Stepford.

Was it difficult to transition from posting videos to running a holistic lifestyle brand?

It took me a long time to figure it out because I was kind of wheels-on-the-ground without any knowledge. I was going through the motions and working my butt off, but I didn’t have the structure or infrastructure that any good business needs to thrive. It’s been a learning process, and I feel like I’m finally at a turning point and I’ve got my s-h-i-t together. I didn’t go to a traditional four-year college, and I had that insecurity: Do I understand business? Am I supposed to be here? And the truth is, Yeah! You don’t necessarily need that traditional education as long as you’re constantly educating yourself.

How have you done that?

Literally, just last May, I took this eight-week Harvard Business School course online through their executive program, on management essentials. It helped me so much. I actually printed out the coursework and syllabus at the end of the class, and now I am constantly referencing it, making sure I’m always doing better business.

Related: Ayesha Curry Shares How She Took Her Love of Cooking and Food and Built a ‘Homemade’ Empire

In addition to your lifestyle brand, you also own a chain of restaurants, International Smoke, with Michelin-starred chef Michael Mina. How did that partnership come to be?

Some friends took me to his restaurant in San Francisco, and he happened to be there. I was a big fan, and I had just read an article — actually, I think it was an Entrepreneur article! — that said, when you find yourself in the presence of someone you admire, don’t be afraid to ask a question. So I knew I had to pick his brain. He was so kind, and we found out that our love of food and how we fell into cooking in the first place were very similar. We came up with a concept for a pop-up restaurant that was supposed to last two months, and it lasted for seven. So we turned it into a real operation, and now we’re opening our newest location, at the MGM Grand in Las Vegas.

A lot of the work you do — a YouTube channel, a personality-­driven brand, a restaurant chain — attracts criticism. How have you developed a thick skin?

There’s been so much criticism outside of my business, when it comes to me as a human. [laughs] That’s what’s helped me develop a thick skin.

It’s fine! When you can have a thick skin about yourself, when it comes to business, you’re gonna be OK. 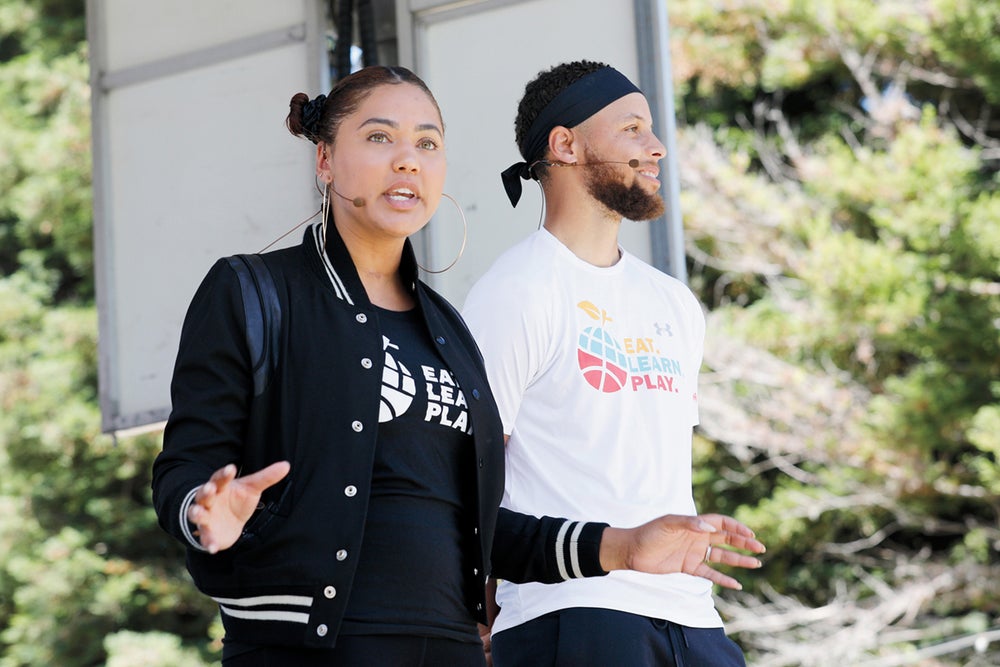 Is it just the nature of having a celebrity platform?

I think so, and having an athlete husband…a lot of people don’t realize that what they’ve seen on TV for so many years [about athletes’ wives] is not the norm. Most of the women have their own businesses and careers, but it’s just not what’s put at the forefront. So I think when I [started building businesses], it caught people off guard, and they felt like I was taking away from what my husband was doing. It just took people a while to understand that we’re married but we’re also two individuals with different goals. But there are good days and bad days. No one likes their business being talked down. You’ve got to create a sort of wet-wicking coat for your skin — just let it roll right off.

But now you and your husband are working together, on your nonprofit, Eat. Learn. Play. How’s it going?

Stephen and I have wanted to form our own nonprofit for a while, but we waited until we had the time and focus to make it successful. Our kids are all born, so we’re ready to do this. The goal is to make sure every child has access to food, a great education, and safe spaces to play. Our model is really simple: We serve as a platform to bring other organizations together and amplify those missions. We’re starting here in Oakland because that’s where we see the most need personally, and because we want to crawl before we walk. This past summer, we were able to fund every single town camp in Oakland, so no child was turned away. That checked all three boxes. Hopefully by July 2020, we’ll start to expand.

Related: Diane von Furstenberg: Every Successful Person Feels Like a Loser (Even Me)

Are you able to build this foundation together without it consuming your time at home with each other?

We do actually end up talking about it all the time, but we’re so passionate that it comes with a sense of enjoyment. Date nights are more like working dinners. But when you see your partner thriving and passionate about something? That’s the sexiest thing in the world. That’s all you need for a date night. We’ll ideate and talk and catch up and eventually fall into talking about the kids. And that’s balance.