As U.S. banks come to the end of one of their best ever earnings seasons, investors are looking for clues as to whether the larger U.S. lenders will be able to sustain this record-breaking streak of profitability.

Helped by robust consumer spending and strong returns from their investment banking units, 2019 was the best year for U.S. banking stocks in more than two decades. The Index surged 33% last year, outpacing the broader market. 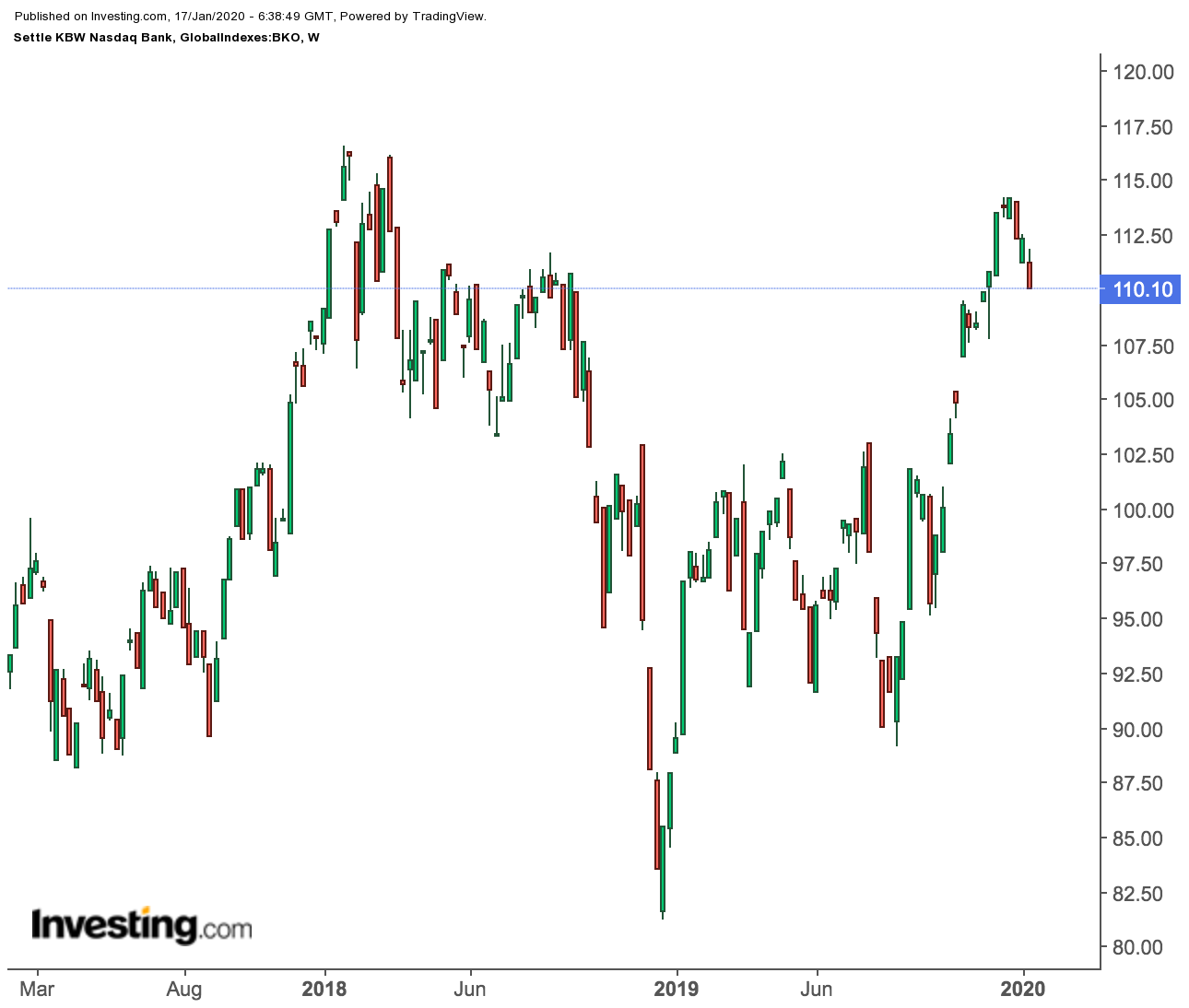 Profit jumped 21% at JPMorgan in Q4, pushing annual to a record $36.4 billion as the giant lender reported fixed-income trading revenue that was $1 billion higher than what analysts were expecting.

Citigroup Inc. a 15% surge in profit for the period, also beating expectations helped by its investment-banking operations and expanding credit card portfolio. Morgan Stanley, another heavyweight, yesterday that profit for the period rose 46% from a year ago, handing investors the best year on record.

Going forward, however, it’s going to be much tougher for these banks to show a similar performance. Analysts at UBS Group last week cut their outlook on JPMorgan and Bank of America Corp (NYSE:) to neutral, saying there aren’t many opportunities in the banking space as “valuations now incorporate the persistence of historically elevated profitability levels.”

Some of the major risks that could thwart this powerful rally in banking stocks include the U.S. presidential election and new rules known as CECL, or Current Expected Credit Loss. As political uncertainty tied with the U.S. election rises, it’s expected that activity in the capital markets will decline.

Some analysts also fear that CECL may introduce more volatility in bank provisioning and some banks may not be able to hike their payouts if this happens.

“It is easy to get caught up in the recent euphoria as the market continues to reach new highs but we see a number of risks as well that have not garnered adequate consideration,” analysts at Wolfe Research wrote in a recent note.

But citing these possible headwinds doesn’t mean that investors should avoid banking stocks altogether. Shares of some of the largest lenders have become attractive after years of restructuring efforts, within a more robust regulatory environment. While political uncertainty is certainly bad for lenders, the U.S. economy and consumer spending remain strong. In fact, signing of the first phase of the trade deal between the U.S. and China removes a major drag on stocks closely tied with the economy, such as banks.

In that improving macro backdrop where the U.S. Federal Reserve is less likely to cut borrowing costs, banks that have large and diversified portfolios will stand to benefit on their consumer lending, such as credit cards and mortgage financing. That strength was visible during the Q4 earnings season.

Our view is that both JPMorgan and Citi are well-prepared to cope with any cyclical downturn due to their sustained cost-cutting during the past decade and the re-balancing of their portfolios. Their efforts are beginning to pay off and both have been producing strong growth in revenue and profit over the recent quarters.

It’s certainly not the best time to go long on banking shares after the powerful rally of the past year. But investing in financial stocks should be a long-term bet, instead focusing on factors that affect their short-term outlook. For long-term investors, we like both Citi and JPM, given their diversified portfolios, growing dividends and improving balance-sheet quality. Such investors should take advantage of any potential weakness in the shares of these two banks.